Jeremy Hunt is a politician, and as a politician he is adept at spinning. In his debate with Stephen Hawking, he seems to be doing better than he is if you ‘unspin’ his message.

I am referring to a Guardian article which summarises the exchanges.

The most important sentences in this are by Stephen Hawking: “As a patient who has spent a lot of time in hospital, I would welcome improved services at the weekend. For this, we need a scientific assessment of the benefits of a seven-day service and of the resources required, not misrepresentation of research.”

This is the core. What Jeremy Hunt (and therefore the Department of Health and NHS England because they have to parrot whatever he utters) is doing is attempting to introduce a policy on the basis of selected data. He selects the data which supports his position, and ignores the data that does not. This is what is meant by the term ‘cherrypicking’. This is what the Blair government did with respect to the war in Iraq.

To really improve things you cannot use the Hunt methodology, you have to use the Hawking methodology. And that requires transparency and honesty and balance. It requires a scientific method. Hunt’s method is choose your policy, and then spin it.

Hunt tries to climb onto the morale high ground by claiming he is aiming at patient ‘safety’. This is spin.

This blog has been mainly about the government policy to abolish GP practice boundaries; this policy was constructed on spin, cherrypicking ‘evidence’, misrepresentation. It is a house of cards. When it was implemented in January 2015, the essential, basic infrastructure was not in place across England. Large areas of London were not covered. This is unsafe. I emailed Jeremy Hunt about this; and NHS England. They did not listen, or their replies were evasions. They talk about safety, but their behaviour shows they do not care.

I took my concerns to the Health Select Committee and they have moved at a snail’s pace, but at least there is some motion. At some stage I will document this. 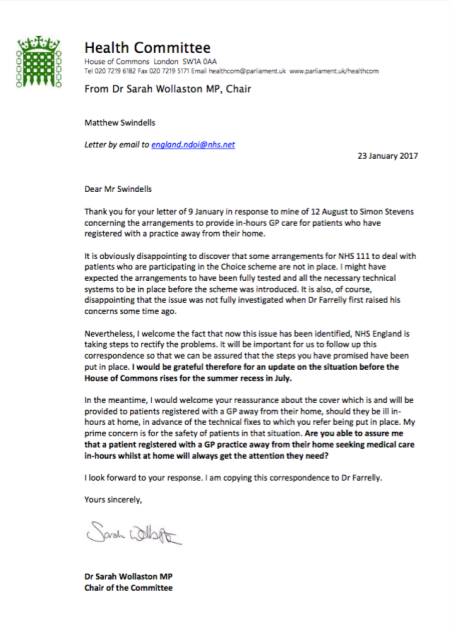 This saga is ongoing.

This entry was posted on Monday, August 28th, 2017 at 11:22 and is filed under Department of Health, Health Select Committee. You can follow any responses to this entry through the RSS 2.0 feed. You can leave a response, or trackback from your own site.