I complained to Parliamentary & Health Service Ombudsman about DoH non-replies to my concerns; they are legally not allowed to investigate

In September 2013 I sent Jeremy Hunt, Secretary of State for Health, an email pointing out the problems inherent in the Coalition Government’s flagship policy to make it possible for patients to register at any practice they wished in England. I received a non-reply from the Department of Health. So I wrote again and received a similar response. So I wrote again and received a reply saying they had nothing to add to the previous emails and that unless I had something new to ask they would not reply to any further emails. For links to the emails and non-replies, click here.

So I sent a complaint to the Parliamentary & Health Service Ombudsman; in its essentials, my complaint was that Jeremy Hunt and the Department of Health had failed to address the issues I raised and respond to each of the issues raised.. I sent ample documentation to demonstrate the problem.

This is the Ombudsman’s reply: 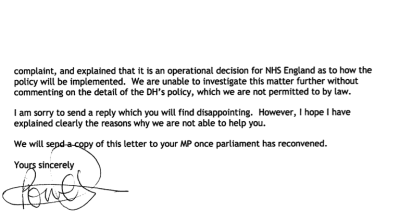 This entry was posted on Monday, May 25th, 2015 at 16:59 and is filed under Department of Health Responses. You can follow any responses to this entry through the RSS 2.0 feed. You can leave a response, or trackback from your own site.